Use of cookies on this web site: Bison Security collects no personally identifiable data in cookies. However, a number of social media and search engine companies place tracking cookies without our consent or co-operation. If you wish to avoid tracking, please read our cookies policy, where you will find links to resources that will help you set your browser accordingly.
Bison Security Cookies Policy

image goes here
Littledean is one of the ancient villages of the Forest of Dean. Situated a mile east of the town of Cinderford, it contains many old buildings dating back to the 1600's, and some even earlier. Littledean Hall, no longer open to the public, is one of these ancient buildings, and it is reputed to be one of the most haunted houses in England, though this is stoutly denied by its current owner who is at pains to discourage the notion..</p>&ltp&gtThe Village of Littledean in the county of GloucestershireThe village was once the site of Roman occupation, and the remains of the Roman temple can be seen in the grounds of the Hall. Even earlier, the hillside to the east of the village was the site of an ancient encampment and the hillside still bears traces of the banks and ditches of the fortifications. Littledean grew up at the centre of a network of ancient Forest tracks (notably the Roman road which led up from the ford and ferry at Newnham). By 1086 a motte & bailey castle, known in later times as the Old castle of Dene, had been built on a hill to the east, in a commanding position above the village and the valley leading up from the Severn plain. Littledean gradually became a centre of local industry, especially iron making and associated metal trades.</p>&ltp&gtLittledean's Church of St Ethlebert was built in the late 12th century with the tower added in the 14th century. Today this has a rather truncated appearance, because the tower originally had a spire which was destroyed in a severe gale in 1894 and never rebuilt. Other buildings of interest are the Red House an early building, possibly with a Norman Core, the Old Coaching Inn and Littledean Hall. Also known as Dean Hall, this is reputed to be the oldest known house in Gloucestershire. The present house is 16ht century in date, with an early17th century north wing and a mid 19th century top story. Within the grounds of Littledean Hall is a Roman temple, sited at a springhead on the edge of the Forest escarpment. It was only discovered in the early 1980's and subsequent archaeological excavation revealed a complex history. Perhaps the most interesting artifact from the site is a piece of sandstone which has a primitive face carved on one side. This was found on the site in 1991 and is of Celtic origin. As the Romans often adopted local religions and sacred sites, it is thought that Littledean temple was built as a water shrine dedicated to the. deity of the River Severn and its bore, for the site has excellent views of the great horseshoe bend in the river.</p>&ltp&gtThe most noticeable building in the village is Littledean Gaol, an imposing structure designed by the London architect William Blackburn using locally quarried red sandstone, it was one of four identical gaols built in the country by Sir George Onesiphorus Paul in 1791 and is easily the best preserved. The public can visit it by prior arrangement.

Photo from Featured Project near Llandogo
Insulated Workshop Doors for a Garage in Bristol
The doors on this garage workshop in Bristol had been in service a good number of years. They were looking tired, and worse than that, there were concerns over their security and safety. With customers, staff and visitors coming and going, that just would not do.&ltbr />&ltbr /&gtThey also wanted to keep the natural light levels in the workshop up, so needed doors with clear panels.&ltbr />&ltbr /&gtThe solution was to fit roller shutter doors in the latest insultaed materials, which had the added bonus of helping to keep the heat in. The doors are now more secure, have the latest safety brake equipment fitted and look much more confidence inspiring to their customers who like to see a nice, modern looking workshop when they take their cars and vans in.&ltbr />&ltbr /&gtOur customers are delighted with the results of the first door, installed this weekend, and are looking forward to the remaining 11 being fitted. Watch this space for progress as the job goes along. 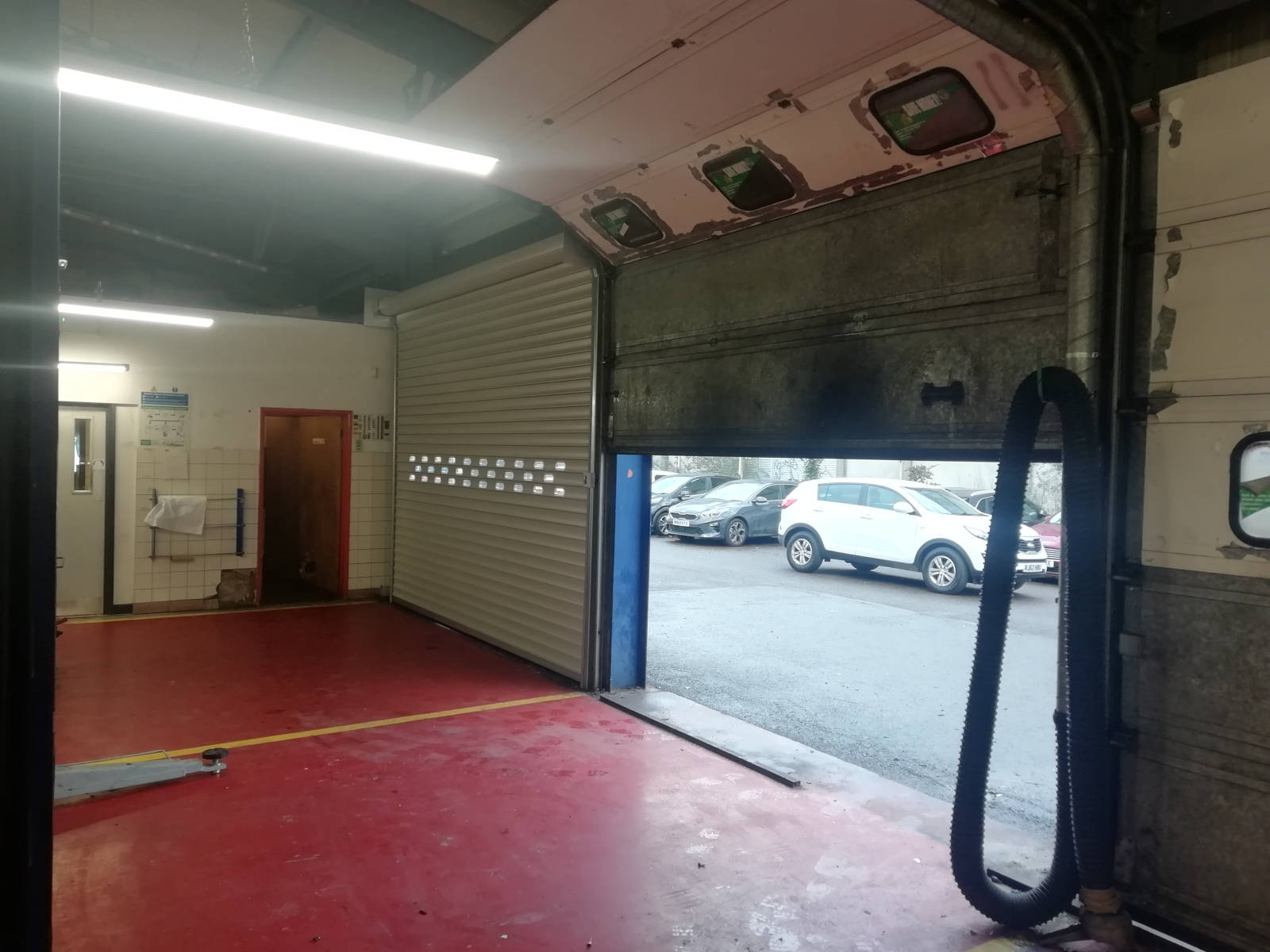